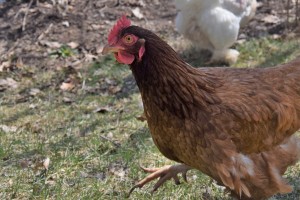 After watching Clara, as seen above, strut in front of me in pure fascination of the large, shiny, black object I held in my hands, I can’t help but snap as many pictures of her as I can. I have to say, over the last four years, she’s developed quite the dramatic flair, and well I may not like it, I am most likely the reason for it. She however, takes sass to new heights. Even as a chick, she would walk right past your hand, even going as far as to brush past it, and just to waddle away as quickly as her tiny body would allow. Now, in this case especially, I sat on the ground so I was somewhat even with them, but I still was on a slight hill, she makes a point to walk in front of me and pose, and take her time watching me to ensure that I do take her picture. She ruffles her feathers and walks away from me. Oh well I think and look around to find another chicken. 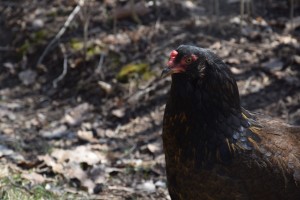 And soon enough, I do find another bird. This time, it happens to be Zoey, my mysterious and dark colored chicken. When I took this picture, she had just come out of hiding. She was hiding in the lilac trees that had once been blooming and soon will be again. She comes out only to be resourceful and collect her findings quickly. Zoey has always been a loner of sorts, but she can fit in with any chicken younger or older. When she was a chick, she was the last to leave the warmth of the heat lamps, but the first to snuggle up to you and fall asleep in your arms.

Watching all of these birds that I have raised over the past eight years, I can’t help but feel a sense of pride over the fact that they made it this long and all may be separated into their own special groups, but all together as a flock, however small they may be. 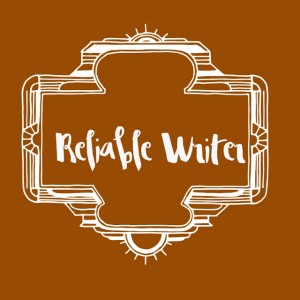